Nikola Tesla electrified the world with alternating current, then slipped into obscurity, dying penniless in 1943 on the 33rd floor of the New Yorker Hotel in Manhattan.
But though his fame was eclipsed by other inventors, he was never forgotten: A hardy band of enthusiasts has long sought to give this eccentric genius his due.
Now his devotees are making headway in their efforts to create a
lasting memorial to Tesla by buying and restoring Wardenclyffe, the overgrown 16-acre estate on the North Shore of Long Island that features his only surviving workshop. 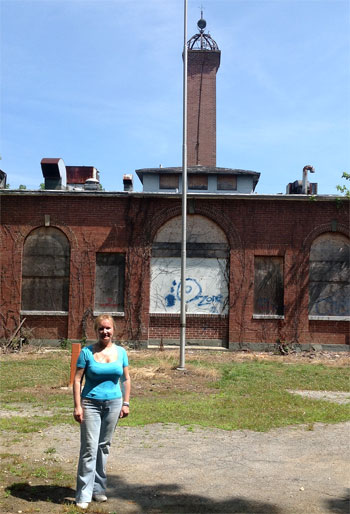 Three fund-raising efforts are under way. All envision turning the rundown laboratory into a museum or educational center, but each has a distinct way of raising the money — online donations; foreign contributions; and simple philanthropy, in the form of a feature film that would memorialize Tesla, a bold visionary of Serbian birth.
“Many people don’t know who Tesla is,” the filmmaker, Joseph Sikorski, said in an interview. “We want to tell his story. It’s a mystery thriller meant to bring in young people.”
The 16-acre site, in Shoreham, has been up for sale since February 2009.
Now — rather suddenly — Tesla fans are racing to buy the property and its crumbling lab from the Agfa Corporation, which used the wooded site from 1969 to 1992 in its photographic operations. The listed price is $1.6 million.
Tesla is best known for establishing alternating current as the basis for the modern transmission of electrical power. His first big success came in 1896, when a generating plant at Niagara Falls sent electricity to industries in Buffalo, some 20 miles away.
In 1901, he began work on a global system of giant towers meant to relay news, pictures and electricity through the air rather than wires.
Tesla’s friend Stanford White — the architect who designed the Washington Square Arch in Greenwich Village, as well as such neoclassical landmarks as the Century Club — drew up plans for a large laboratory of red brick, while a colleague designed the adjoining tower.
By 1903, the wooden tower rose more than 18 stories above the surrounding farms. One night, it fired bolts of electricity into the sky. But the system failed for want of money and practicality.
Today, the ruins of Wardenclyffe include the tower’s concrete foundation and the decaying laboratory, its windows boarded up and covered with graffiti.
“Raccoons live in there, and the roof leaks,” said John P. O’Hara, a Long Island real estate agent who represents the property.
The budget of the Tesla movie, to be called “Fragments From Olympus,” would include the purchase of Wardenclyffe. To lure investors, Mr. Sikorski, a maker of corporate videos, filmed afive-minute teaser that features Leo Rossi, a veteran character actor who appeared in such movies as “Analyze This” (1999) and “The Accused” (1988), in which he played the film’s central antagonist.
“The man was a veritable genius,” Mr. Rossi says of Tesla in a video promoting the proposed film. “Why don’t we make more movies about people like him?”
The filmmakers say they have signed up the actress Sean Young (“Blade Runner,” “Wall Street”) and the cinematographer Howard J. Smith (the “Matrix” films, “Men in Black III”). The plot revolves around the inventor’s struggles and triumphs, as well as the United States government’s interest in what Tesla described as a death ray.

If the film moves forward, its funds for buying Wardenclyffe would go to the Tesla Science Center, a private group in Shoreham that is seeking to turn the dilapidated laboratory into an educational memorial.
Another fund-raising effort emerged this month, when the Web comic site The Oatmeal helped another site, Indiegogo, raise almost $1 million toward the purchase.
The effort is to run through late September.
Jane Alcorn, president of the Tesla Science Center, said the Shoreham group was preparing to approach Agfa about the purchase and that, if successful, the sale would qualify for as much as $850,000 in reimbursement from New York State.
“People seem excited to contribute,” she said last week about the latest push, noting that the Indiegogo donors lived in 102 countries.

The final acquisition bid involves a Moscow woman of Serbian descent named Milka Kresoja. (Tesla was of Serbian birth, and one of his sisters was named Milka.) She has contacted Agfa and visited Wardenclyffe but publicly disclosed few details about her plans.
In an e-mail, she called her intentions “noble and sincere.” Her plan, she added, is to use Wardenclyffe “not only as the reminder of what great Tesla truly did for humanity” but as a way to inspire new advances.
Ms. Kresoja owns a restaurant in Moscow, the Blue Elephant, and practices a supposed method of mystic healing known as Tesla Metamorphosis. It claims that therapeutic rays can travel long distances to cure cancer and even birth defects. Ms. Kresoja helps run its seminars around the world, which can cost $1,840.
Tesla fans on Long Island seem wary of the foreign effort, worrying that it might turn the old laboratory into a theme restaurant or a mystic wonderland — or both.
“I’d like to see a local group get it,” Mr. O’Hara said.